September 20, 2017
For the first time in my life I've actually been applying myself to training for something, it's been about 10 weeks since I started an aperiodized climbing training plan, based loosely on Steve Bechtel's Logical Progression.

The basic premise is that you rotate between the three types of sessions, progressing them all simultaneously, rather than peaking and letting each of them fall in turn.

The results seem to be pretty good, I'm climbing harder than I ever have before, and am seeing benefits in all three areas.
Finger strength and general strength is improving (so surprising given that I've never done any lifts before)
My on route endurance is improving, and my ability to apply power is increasing as well.

I still struggle with setting goals, but one route that I've been keen on doing for years is Butterfly Wall Direct (24) at Nowra. I first had a look at it in January this year, and the moves felt surprisingly doable. I spent another 3 days looking at it 2-3 times in mid July, making it towards the top of the upper crux, but feeling really spent at that point.

The last few weeks have seen less climbing, and I've spent more time on granite as well for some variety, but getting on the wall this weekend I felt strong. The first lap was pretty bad - I couldn't remember the beta for the footwork on the two hard moves, but a few hangs, and trying different footers again saw me to the top of the crux. I lowered off, and took a half hour to recover properly, trying not to get my hopes up too much. 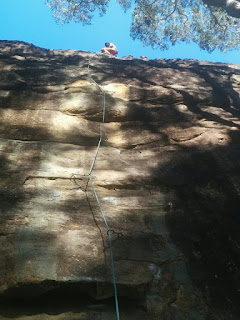 On this attempt the lower undercling crux went easily, and the top one shortly afterwards. My footwork on it was a little off, but I pulled through. Even the rest felt better than it has in the past, and I was able to regain some strength for the push to the top.
Overall it was much easier than expected, and I have to think that the training had something to do with that.

Now to move onto some harder stuff. See if I can continue the trend of my first ascent of a grade being onsight.
climbing projects Training

February 08, 2018
Last weekend saw most of the yearly traffic to Black Range descend on the area in a single weekend for the 4th North Black Range boulder meet, organised by Duncan Brown.
It's an opportunity to get out with a lot of like minded people, crush some boulders, and one of the only times that I can find the mats and spotters to have a serious go at some of the highballs.
This year saw the first ascent of 'The Riddle', an unclimbed highball on the main bloc at The Hill. Sadly that happened before I got there on Saturday, and while I had a short go on the bottom part of it, I was lacking in both mats and spotters to try the top part. I did redo 'Percival Extension' that I first sent at the festival last year. Not bad given that I've made a full pivot from regular bouldering last year, to mainly sport climbing this year.
The weather wasn't great, a little cloudy and humid, and I think that played a part in suppressing numbers compared to last year. but both days …
Read more

August 22, 2017
March  I've finally bitten the bullet and purchased an autoblock belay device, Actually, thats not quite true. I've had a Gri Gri for years, but it's used solely for tensioning slacklines. I've never liked the way they operate, I can't feed slack well enough with them, and with the exception of the times when someone is dogging a route, I've rarely found that the ATC guide isn't sufficient. You never short rope anyone, and give a better belay in general. However getting a rock dropped on me a few months ago has got me looking at alternatives, I've now got a MegaJul for cases where the rock is concerning. But it too struggles to pay out rope as nicely as I'd like if someone is going for a hard send on good rock.

We'll see how the Vergo goes, everything I've heard about it suggests that it's a gri gri, but a little better. If it addresses a few of the gri gri issues I may use it a fair bit, if not, it will still be useful when someone wan…
Read more 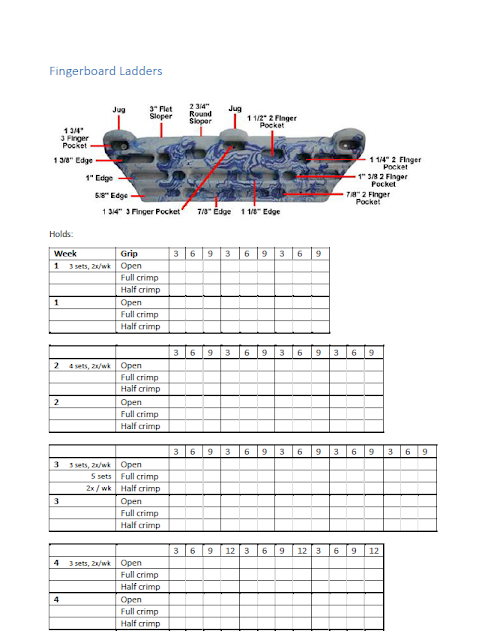 Now that I have my own bouldering wall, I've decided to get a little more serious about my training for climbing.
Read more